My PawPaw died on Sunday. He had cancer all over his body, and he was suffering.

My MawMaw is, I’m convinced, a superhero. I’ve never known anyone like her. She took care of him day and night for a year in a half. By herself. At the age of 83. She didn’t want a nurse. He was her husband, and when she said “in sickness and in health,” she meant it. She has been incredible.

I spent a couple of days at the hospital with him last week. He wasn’t saying much, getting weaker and weaker by the day. When he was hurting or agitated, he’d yell out for her – “Mama! Mama!” And there she’d be. “I’m right here Daddy. I love you. You’re not alone.” It was heartbreaking. And beautiful. 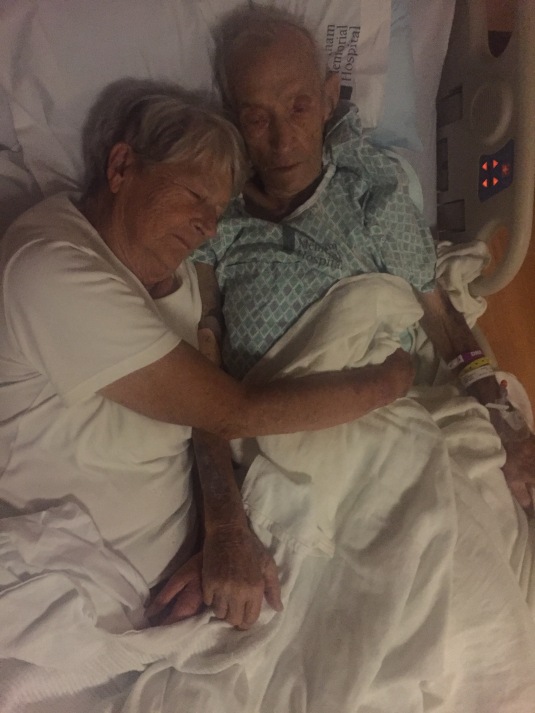 On Saturday, the day before he died, I was sitting by his bedside. He wasn’t speaking much, and when he was, it was to either call out to MawMaw or to ask us to shift him. At one point, his morphine started wearing off, and he was getting agitated. He started saying something over and over again, but I couldn’t quite make it out. I leaned in, and then I heard him – “Sing me a song. Sing me a song. Sing me a song.”

I teared up and sang “Amazing Grace.” He was still agitated. “Sing me a song. Sing me a song.” I thought for a few seconds and then began singing “I’ll Fly Away.”

When the shadows of this life have gone, I’ll fly away.

Like a bird from these prison bars I’ll fly, I’ll fly away.

I ached for him to be free. After I finished singing, he weakly whispered words I couldn’t make out. I leaned in. “Fly me away,” he whispered. “Fly me away.”

“Are you ready to go home?” I asked. He said yes. Those were his last words to me. 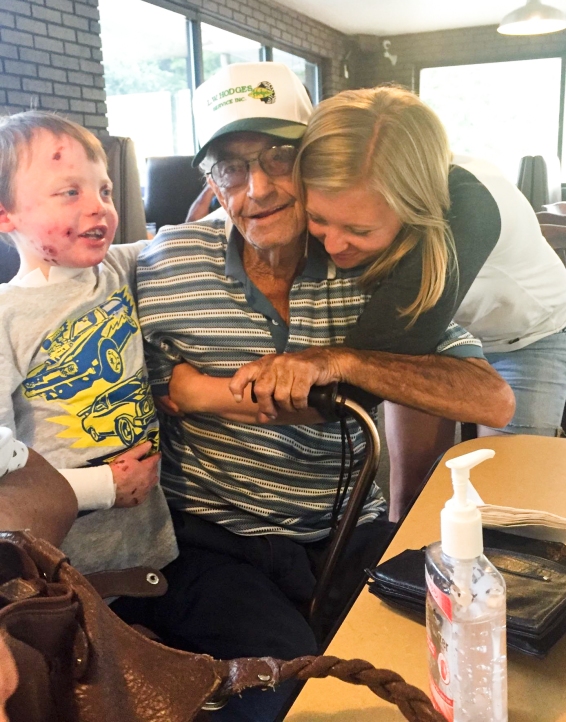 PawPaw and MawMaw had a little boy who was born with Spina Bifida. When he was four, he went in for surgery to remove a pocket of fluid on his spine that was life-threatening. He never woke up from the anesthesia. I don’t think they ever recovered. Do you ever really recover from something like that?

MawMaw is now going to have to learn to live without the love of her life, and her best friend. My heart is breaking for her. She’s surrounded by family and friends who love her so much, but tonight is her first night alone in the house. I know she has to do it sometime, but I can’t stand the thought. Did I mention she’s a superhero?

PawPaw has flown from those prison bars. He’s free, whole, healed. Can you just imagine the moment when his little boy ran into his arms?

Grief like this is a strange dance between joy and sorrow. PawPaw knew Jesus. His pastor who spoke at the funeral said he’d often walk out of church with tears streaming down his face. He was an amazing friend. So many grown men came through the line at the funeral home, with tears in their eyes. He helped everyone. He could fix anything. He liked bluegrass and old gospel music. He liked NASCAR. He loved his grandkids. He took care of his people. He sure is going to be missed.

Will you pray for my MawMaw? They loved each other big. I know she will grieve for a long time.

And I know that God will hold her close while she does.

Disciple, Child of the King, Wife to a great guy, Hot mess mama to two wonderful boys here on earth and one waiting for me in Heaven. Have been deep in the valley and high on the mountain, but mostly trying to learn to be peaceful and BELIEVE Him for ALL THE THINGS in the every day. Fixing my eyes on the unseen, yearning for Heaven, trying my best to love like Jesus till it's time to go home. Tacos are my love language and crying is my spiritual gift. :) View all posts by Patrice Williams